(above, an image from the Israeli Defence Forces tumblr)

The rights and wrongs of what’s been happening in Gaza and Israel aside, there’s been a lot of commentary on a social media war running parallel to the real war.

This has by and large been spear-headed by Israel’s (verified) @idfspokesperson and Hamas’s @alqassambrigade Twitter feeds.

On that, the most accurate description of what’s been going comes from Wall Street Journalist Tom Gara:

As in real world, the online “battle” isn’t one at all. Israel has a brilliant multi-front media operation, Hamas has a crap Twitter account

That’s because the Hamas Twitter account by and large consists of Soviet-style missives such as “Al Qassam Brigades shelling the occupied city of Ashdod with 5 Grad missiles”.

By comparison, whoever runs the IDF’s social media operation clearly understands the effective use of imagery online, as that ‘multi-front media operation’ includes a large dose of videos, images and also infographics.

For example, on Saturday the @idfspokesperson feed tweeted out seven videos, ten images, an infographic, and for good measure a link to the Israeli Armed Forces tumblr.

The latter explicitly describes itself as a place where you can “find visual content you can use to help us spread the truth.”

A lot of this content is as you’d expect both effective and very professionally put together, though a few items are (to my mind) surprisingly two-dimensional.

The second area of discussion has been the use of Instagram, in particular the many smiling (and somewhat surreal) images of Israeli teenagers called up for duty

In fact, Instagram is rapidly becoming an alternative news source from war zones 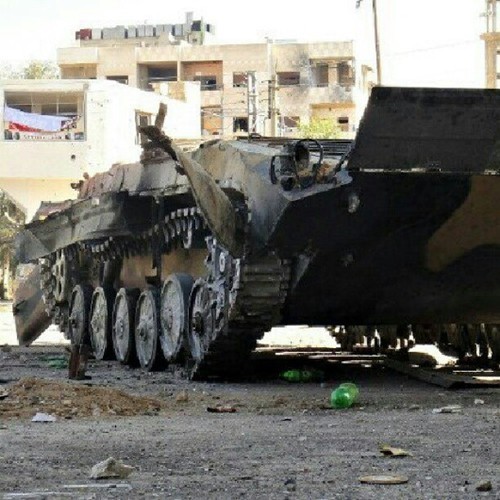 For instance, @fsaphotos (not clear whether its actually official or not) has been uploading a variety of propaganda and war images from Syria for a month now, while more 1st hand images of the Syrian conflict can be found via @dimashqi (including the example above).

Back in 2002, the major media 'innovation’ in the Iraq war was the notion of embedding US and UK journalists into army units.

Fast forward ten years, an eternity in Internet terms, and according to Red Bull’s boss Dietrich Mateschitz, brands themselves are now media companies.

If we use assume that countries are also now brands, will armies of the future be able to dispense with things like embedded journalists completely and just arm troops with smartphones and access to an Instagram feed?

Arguably the very unique 'brand experience’ that the IDF has been creating over the past week suggests that this might be the way we are headed.