Since then, a range of different studies have appeared trumpeting the supposed impact Pinterest has on web traffic and ultimately sales.

Most recently, Pinterest marketing platform Pinfluence (via Venture Beat) claimed that while Facebook is good for brand awareness and community building, Pinterest is what really brings people to your site. 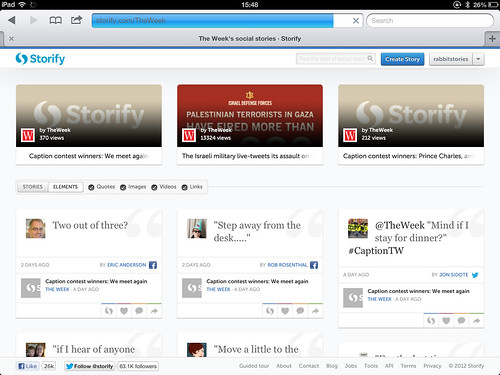 If you’ve not yet looked at the new, revamped Storify, you should. I’m not the only one who has noticed that there seems to be a nod to Pinterest, in that your home page presents you with a selection of ‘cards’ (be they tweets, links, pictures) mixed in date, as opposed to story, order.

Back in the Spring, when Instagram was being sold to Facebook, the tech and social media press started to turn their attention to so-called Instagrams of video. By that they meant the mobile video social networks, of which Socialcam and the (iOS only) Viddy were in the forefront.

In May for example, the talk was of Viddy having 26 million users and Socialcam 36 million. But taking a video is different to taking a photo. It’s more difficult to get it to look good (despite fancy filters), there is more effort involved and some people just don’t feel at home with it.

Why digital cameras are headed the same way as newspapers. And why Twitter should be worried The decline of the print media market (at least in the UK and US) due to the Internet is now an accepted fact. Recent reports point to the digital camera market heading the same way, thanks to smartphone sales.

Here is the evidence, and what it means:

Instagram to usher in ‘a bold new era of citizen journalism’? In previous months when explaining a (then not as large) Instagram to brands, we generally summed it up as a ‘visual Twitter.’   After all, a lot of the conventions from hash-tags to asynchronous follower relationships are the same.

It turns out Instagram boss Kevin Systrom has much the same idea, at least when it comes to Twitter currently positioning itself as a source of breaking news and media in its own right.

An in-depth look at photo-sharing service EyeEm for brands

This article looks at some of the strides made by Berlin based photo-sharing network EyeEm, and why brands, and anyone interested in the photo-sharing space, should keep an eye on it. Following Facebook’s $1 billion Instagram Spring acquisition, the spotlight briefly turned on a series of so-called Instagram alternatives to see if they would mop up disaffected users not happy at being part of the Mark Zuckerberg empire.

The numbers tell their own story.  With 100+ million accounts and more daily mobile users in the US than Twitter, few consumers seem to care who the ultimate owner is.  So the also-rans seemed to fade away, case in point Instagram clone PicPlz, which shut down in July.

I’d make two points though.  First of all, there is room for other mobile photo-sharing services.  So long as you stop benchmarking them against Instagram.  There won’t be another 100+ million user network like it - at least in the short term. Did you know that worldwide 741 million mobile phones have some kind of camera capacity or that Facebook now has 10,000 more photos than the US Library of Congress?

These are some of the amazing stats taken from an infographic - one of the best I’ve seen - from mobile photo app Overgram, which allows you to add typography onto your Instagram shots.

The full infographic is below. (above, an image from the Israeli Defence Forces tumblr)

The rights and wrongs of what’s been happening in Gaza and Israel aside, there’s been a lot of commentary on a social media war running parallel to the real war.

This has by and large been spear-headed by Israel’s (verified) @idfspokesperson and Hamas’s @alqassambrigade Twitter feeds. I’ve given half a dozen or so presentations about why the so-called visual web matters, complete with countless stats.  So, to set the scene around what this site is all about, I’ve pulled out ten:

1 - As smartphone sales have increased, digital camera sales have gone down - by as much as 29% in the UK according to Mintel. Hello, and welcome to 8mpx!   After blogging about statistics and research for the best part of five years I thought I’d try something new.

Over the past six months I’ve given various presentations on the so-called visual web.  Rabbit, the place where I work, has also made a name for itself on running campaigns on Instagram and Pinterest.

Luckily, platforms such as Instagram and EyeEm also happen to be ones I’m personally active on and interested in.

So, creating a site devoted to visual social media news and trends seemed like an obvious choice.